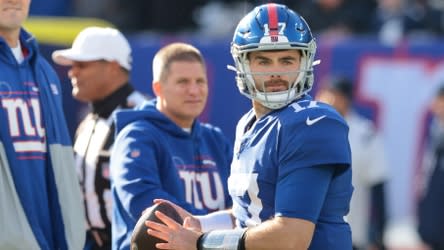 But it was more than enough time for him to emerge as a fan favorite, and for even people in the Giants organization to become a little curious about what he can do.

The latter is one of the reasons why the 23-year-old Fromm is expected to start on Sunday when the Giants play at Philadelphia. Starting quarterback Daniel Jones is done for the season with his “sprained neck,” and Mike Glennon hasn’t been particularly good as his short-term replacement.

So with three games left in another lost and meaningless season, why not take a look at the young quarterback from Georgia? Maybe Fromm will be terrible. Maybe he’ll prove his ceiling is career backup. Or maybe he’ll show the world a little more.

There’s only one way to find out.

“I’m very confident in myself,” Fromm said, “and what I can do”

So are the Giants after his garbage-time performance in a 21-6 loss to the Dallas Cowboys last Sunday. Fromm looked confident and in control of the Giants’ offense, going 6 of 12 for 82 yards. His numbers would’ve been better, if it weren’t for a couple of drops by his receivers. He also nearly led the Giants to a rare touchdown before the drive stalled at the Dallas 9.

Of course, as Giants head coach Joe Judge said, “There’s a drastic difference between starting an NFL game and just coming in at the end. There’s a lot of things you’re going to see structurally, defensively, the situations in the game that pop up. Playing the entire game is a lot different than coming in at the end of the game and just playing a snapshot for us as a team to see.”

It’s hard to know if Fromm can handle more, since those were his first snaps in the NFL. Before that, he spent all of last year and most of this year standing on the sidelines as an inactive third quarterback for the Buffalo Bills after they took him in the fifth round of the 2020 NFL Draft.

Coming out of the University of Georgia, though, Fromm was projected to go perhaps as high as the third round. Scouts thought he was a decent, intelligent quarterback who could competently run an NFL offense and a good leader who could energize his team. The knock on him was his lack of arm strength, which led to some accuracy issues on deeper throws.

The Giants don’t need him to be a star, though. They’re not looking for a replacement for Jones (yet). And they likely wouldn’t even be swayed if Fromm lights up the scoreboard over the last three games. For them, this is likely more about seeing whether Fromm is a capable backup for next year, and maybe beyond.

He’ll have to do that on Sunday against an Eagles defense that has been pretty good this season and ranks 11th in the NFL. They’ve held five of their last seven opponents to fewer than 19 points — including the Giants, in a game New York won, 13-7, on Nov. 28 — two days before Fromm arrived.

Given the Giants’ incompetence, it’s hard to imagine that Fromm is enough to solve a problem that’s been dragging them down for years — especially if the Eagles commit to a rushing attack that the Giants couldn’t stop (208 yards).

But a big number on the scoreboard or even a win isn’t that important to a franchise heading for an offseason of change and probably looking more for a very high draft pick. This is just about giving Fromm an opportunity.

There’s no harm in seeing how he can play.

Pick: Take the Eagles, minus 10