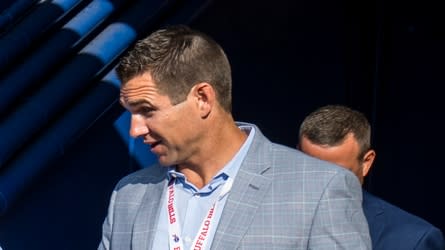 In the wake of Dave Gettleman‘s retirement, the Giants are conducting what ownership is calling a “comprehensive” search for his replacement.

Co-owners John Mara and Steve Tisch were joined by senior VP of player personnel Chris Mara are in the virtual interview room.

Hortiz has been with the Ravens since 1998, working his way up through their scouting system before becoming their director of college scouting and now director of player personnel.

Hortiz helped the Ravens scout and eventually draft notable players like Joe Flacco, C.J. Mosley, and Ronnie Stanley, among others.

Schoen and other candidates will be interviewing virtually during the first round.

Schoen has become Bills GM Brandon Beane’s right-hand man during his time in Buffalo. He began his front office career as a national scout with the Miami Dolphins in 2008, when he worked under former Giants head coach Bill Parcells.

The Chicago Bears have put in a request to interview San Francisco 49ers director of player personnel Ran Carthon for their GM job, reports Albert Breer of SI.

The Giants also have a request in to interview Carthon for their vacant GM job.

Harris, 44, has been in the Cardinals’ front office or 14 years.

In his current role, he works with GM Steve Keim while managing the college and professional personnel departments. He also evaluates college prospects and oversees player acquisition and evaluation and assists with player contract negotiations.

Before his front office career, Harris played with the Cardinals and Denver Broncos in the NFL from 2002 to 2006.

The Giants were once thought to be grooming assistant general manager Kevin Abrams to be Dave Gettleman’s eventual successor. But his candidacy is now just collateral damage from the Gettleman Era.

The 51-year-old Abrams will not be interviewed for the team’s general manager position, according to a team source, meaning the next Giants GM will indeed come from outside of the Giants’ “family.” The Giants have either promoted from within or hired a former team executive each of the three times they had hired a GM since George Young arrived from outside in 1979.

But they clearly know they couldn’t do that now.

The Giants have added two Tennessee Titans staffers to their list of interview requests.

Poles is also a candidate for the Carolina Panthers’ GM job.

In addition, New York will interview assistant GM Kevin Abrams in the coming days, per Vacchiano, who notes that Abrams will likely be the only serious internal candidate.

Abrams has been with the Giants since 1999, and became the VP of football operations when Gettleman was hired.